Let’s shout about it! Find out everything there is to know about rescue dogs, re-homing projects, shelter tales and inspirational stories from our team of Wag Advisors. Stay updated on the latest travel deals and the latest animal rescue news all in one place!

With every dog there is always a good story. With rescued dogs, even better stories. But every so often there is one in a million rescue story which will be turned into a film!

Please meet Koritsi-Mou and Amanda a very special lady who gave up her glamorous career to found a small shelter in the North of Greece.

In Amanda’s own words, this is the true story of a mother’s love and the incredible bond when a dog finds a human they trust.

“Koritsi first appeared outside the shelter one day with a male shepherd dog, both were very obviously underfed and very timid so stayed at a distance. I left food and water for both of them they ate and went back to their farm.

This became a regular thing. Koritsi and her friend would appear when they were hungry or hurt. I’d fix them up, mainly the male dog was injured, fighting for the females who came into season.

Koritsi then had pups but the farmer took them away too soon, she still had milk. She was really distressed and it was heart breaking to watch as she searched for her pups but never found them.

Koritsi had been a great guard dog and her pups were well sought after. The farmer had given them away to other farms.

From that day Koritsi NEVER went back to the farm or tended the sheep. She remained outside the shelter where she became much less timid, so we built her a kennel and there we began to bond.  She would be so happy to see me drive up – she’d dance like the horses.

So as Koritsi was now living with us at the shelter I asked the farmer if I could have her spayed. NO was the very quick response. They wanted her puppies!

Koritsi fell pregnant again, only this time the winter was well on its way. We are in Northern Greece and can often have temperatures of -20C and that winter the snow fell solidly for days. So we extended her kennel outside the shelter, but one day she just disappeared. She must have gone off to give birth and hide her babies, but we never found out where.

After a few days Koritsi re-appeared, thin and hungry. She ate, drank and while I wasn’t looking sneaked off back to her hidden babies. Every day that she didn’t return felt like a year, she would appear for food only now and then. Food and water were left for her everyday but she didn’t always come to eat. In the now frozen landscape she was all alone with her pups.

Then one early morning, freezing snow all around, I arrived at the shelter to find Koritsi sitting very proudly with one pup. First thought was to get the pup and mum safe and warm.  My second thought was this little pup must be the only surviving pup as the weather had been so cruel.

Second morning Koritsi was there again, sitting on the hill next to the shelter gate with the second pup. I didn’t see her baby at first as she had blended into the back ground being black and white.  She was sitting next to the black shelter fencing and surrounded by snow. This tiny pup was, who is now known as, Amy.

Koritsi was unsettled and after seeing her two pups reunited and eating a little she left. The pups were happy and content in their new warm kennel with lots of blankets.

The next morning, before the farm traffic started, I arrived at the shelter and to my total amazement Koritsi had another three healthy pups waiting for me. They were playing in the snow!

I praised Koritsi for being the best mum, she looked so proud of her litter. Then to my amazement she led them into the puppy pen and sat for a while with all five pups. When they had cuddled up and gone to sleep Koritsi left them and came outside to me. She ate a little, stayed for a cuddle then to my disbelief began to walk away.

Now Koritsi was not only painfully thin but she looked tired, she was weak.

I pleaded with her to stay, telling her I would take care of her, I told her that her pups needed her. But slowly she walked away looking back now and then.

I was really torn, did she want to go off to rest or worse was this the end for Koritsi, had the birth and taking care of these beautiful pups been too much for her through such a harsh winter. Or were there more pups?

I had to let her go but that afternoon and evening I searched for her but my search was not successful. I didn’t sleep that night, I kept thinking Koritsi was out there in the snow, weak and cold.

Early the next morning, with a sorry heart, I headed up to the shelter to make sure the pups were ok and feed them. And there sitting on the hill was beautiful, happy Koritsi, head held high, and three more pups playing happily around her tail that was now wagging!

Koritsi led her last three pups into the puppy pen and this time she stayed!” 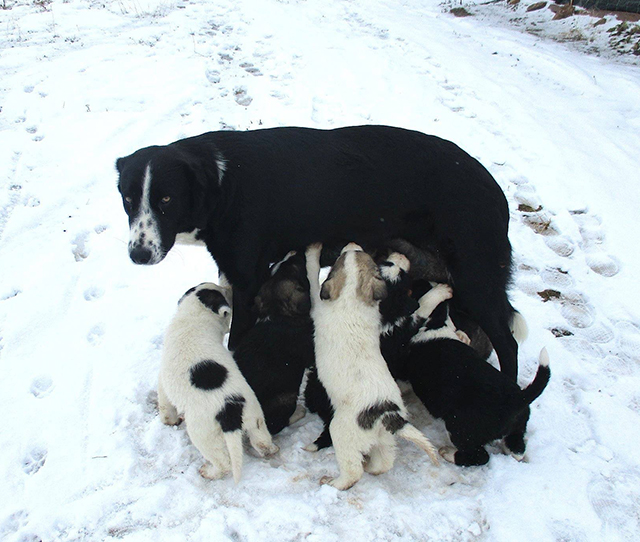 All the pups lived happily ever after and Koritsi became Amanda’s shadow, following her car as she made her way to the shelter every morning. She would then sits at the top end of shelter looking out at her old farm, watching the sheep go out to graze in the mountains but she never got any closer.

All eight of Koritsi’s gorgeous puppies survived and we helped Amanda find them wonderful new homes here in England.

Amanda was one of the first Rescue Heroes that our charity supported. Her shelter was entirely self-funded and the survival of the 80 plus dogs in her care is still entirely due to the generosity of Amanda’s family and friends.

Amanda gave up her life for her dogs and worked 24/7 in hostile conditions to try and make life better for the neglected and abused farm dogs which surrounded her.

Amanda received absolutely no support from the local municipality who were content to see her take in dogs, who otherwise would have been poisoned or run-over, but wouldn’t sanction the vital paperwork for them to become legally adopted.

Koritsi remained a street dog and continued to wait for Amanda every morning, following her car to the shelter. Her bond with Amanda was so incredible that when tragedy struck she understood and took up her place protecting the shelter.

Amanda died suddenly in November 2020 leaving 80 homeless dogs.  Her British friends stepped in and during Lockdown have performed small miracles but there was no-one quite like Amanda.

The tragedy is that they have found homes for many of the dogs but the municipality still refuse to grant legal permission to have them adopted.

We never give up hope that this idiotic decision will be reversed. Meanwhile the friends are battling to keep the dogs healthy and fed.

In Amanda’s memory we are appealing for donations to care for the dogs’ until they can all be adopted. The food bill alone is 2400 euros a month.

Every penny of your donation will help Amanda’s homeless dogs and will be so gratefully received. You can donate here:

You can find out more about Amanda’s dogs for adoption and how you can help here: www.compassionforgreekpaws.com

Education is the most powerful weapon you can use to change the world.